Huddah Monroe is at it again, she has people talking about her after posting up some shit that might make a nun blush.

The controversial Kenyan socialite says that her pussy is the best in the world and that she can’t fathom living without getting fucked, she loves dick way too much to not get fucked on the regular.

She disclosed on social media that she has men under her thumb who has done stuff for her like buying her houses and cars and it’s not every one of them who gets to fuck her.

“I don’t wear panties! I own none! My friends. My boyfriend everyone wonders why. But it’s this pussy, it’s too fresh to stay wrapped up! Panties are for people with smelly vaginas. I think you need it to trap that odor,” she wrote.

She seems to have a lot of simps who are willing to do anything and everything just to get to fuck her like a slut. 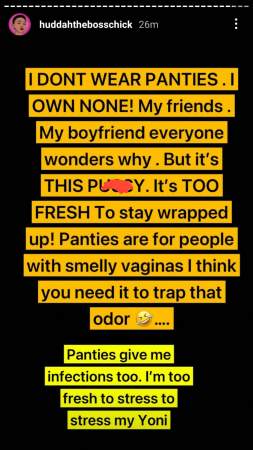 Huddah also shared that she never wears panties, like ever and when she is in her menses she uses menstrual cups…

“I use menstrual cups which I will introduce soon. It doesn’t have any leakage,” she wrote. 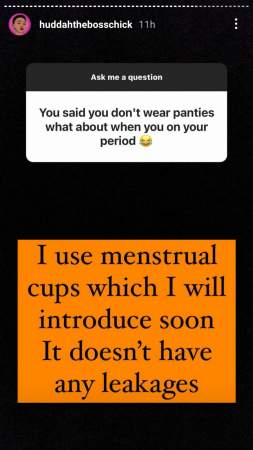 She merely wants women to stop wearing panties and let that couchie breathe some clean, fresh air is all.