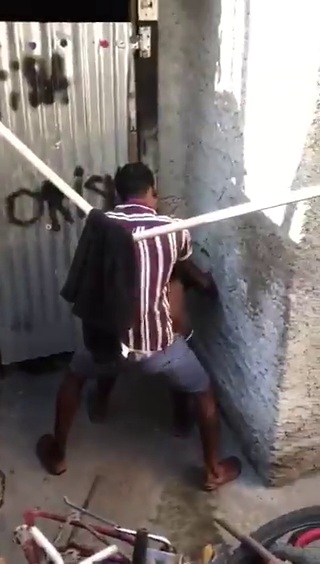 Randy man was left with no option but to jerk off after he was prematurely pulled out of the pussy by a married women he was fucking.

The two lovebirds were secretly recorded by a nosy neighbor who was watching them fuck outside a toilet in an unnamed ghetto neighborhood.

The man was gently pumping his cock from behind as the woman bent over to lean on the toilet wall.

He thrusted gently for about five seconds before he unleased a salvo of moderate thrusts, the woman was enjoying the romp as she produced some low tone moans.

The fucking continued for about 40 seconds before the woman cut short the man and pulled up her panties.

A phone call is what prompted the married woman to hurriedly stop the randy man from fucking her from behind.

She picked the call and the man was left standing there so confused, he tried sneaking back his erect dick in the woman’s pussy but she fought him off.

Watch the clip below